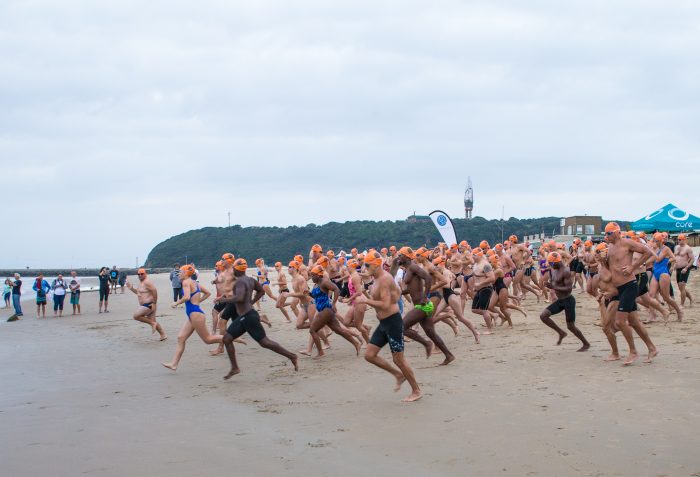 Despite the cold front which descended upon the KwaZulu-Natal coast, a record 143 swimmers braved the Indian Ocean on the morning of 13 May to compete in the fourth annual Four Elements Ocean Challenge.

Taylor, who is also a former national surf-lifesaving captain, said this has been one of the most challenging open water swims on the calendar in South Africa.

“Extremely powerful southerly winds whipped up the ocean, forcing a course change giving the organisers a bit of a nightmare,” said Taylor. “The changed route was tough going with and then against the current so kudos to all competitors who finished the race. It was a monumental effort by everyone.”

Nxumalo, who is three-time Lifeguard Endurance Champion, winner of 2016 Miway Surf Swim competition and Lifesaving Ironman as well as a silver medallist winner in the senior men’s surf swim category at the SA Stillwater Nationals, was thrilled to have placed in the top three.

“All I can say is that the swim was a lot faster than anticipated, but I’m happy with how I swam and how my fellow Durban Lifeguard team members did as well,” said Nxumalo.

Commenting on this year’s race, Taylor said: “We’re quite accustomed to poor conditions for the challenge but this year was particularly tough because of the rain. Swimmers said the race felt a lot longer than 4.5km because of the strong current but most managed to finish.”

This is a notoriously challenging race that puts even the best swimmers to the test. The 143-strong group set off from uShaka Beach in the early morning, accompanied by a pod of dolphins, with the course being changed from a finish at Country Club Beach to a loop out to Dairy Beach and back to uShaka Beach. Two competitors were pulled out the water early on because of cramp and hypothermia, with another competitor treated for hypothermia at the end, however all three made quick recoveries.

“There was an incredible atmosphere with the race bringing out a camaraderie that is so much a part of the East Coast,” said Taylor. “We were very excited to introduce the new prize category as a way of thanking the eThekwini Lifeguards while giving them a chance to prove their skill in the water.”

The Four Elements Ocean Challenge is the only ocean swim of its kind on the KwaZulu-Natal coastline, held annually in support of World Oceans Day on 8 June, a day dedicated to raising awareness and funds for ocean conservation. This year money raised from entry fees to the Four Elements Ocean Challenge will go towards the launch of an online education programme focusing on environmental entrepreneurship for youth.