You are here: Home / Archives for table 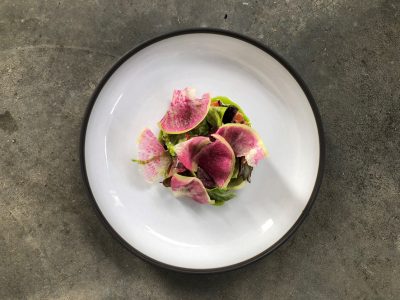 Chef Guy Bennett of The Restaurant at Grande Provence has tweaked his summer dishes with his signature modern South African flair by introducing new seasonal flavours and lighter textures at this landmark Franschhoek eatery.

Unfettered by the notion of a fixed restaurant menu, Chef Guy champions an ever evolving and dynamic menu allowing for new creations to make their appearance.

“We change our dishes constantly incorporating new ingredients and produce that become available as the seasons change,” says Chef Guy.

His passion for local produce is evident in his new starter of gin and citrus cured Franschhoek trout, adorned with a fresh salad of pak choi, radish and sour cream. His new yellowfin tuna starter has a flavourful oriental twist of tataki, daikon, braaied jalape?o and avocado cream.

For his main course, Chef Guy has introduced a new cured duck leg confit served with sweet potato dumplings, saltana and Chinese cabbage, and a refreshing apple chutney to lift the flavours.

His choice addition to the summer dessert line-up is a dreamy yet ever-so-light Valrhona éclair and macadamia crumble served with a dollop rooibos ice cream.

The Restaurant at Grande Provence is open daily for lunch and dinner. The menu offers pairing suggestions for every dish from the wide range of elegant Grande Provence wines. To book your table, call Tel: (021) 876 8600 or email reservations@grandeprovence.co.za. Andrew hopes to crowdfund for 3 causes close to his heart. Photo: Supplied

Andrew Patterson (38) an avid hiker and entrepreneur, originally from Johannesburg has put together an innovative crowdfunding campaign in hopes to transform 1 million lives in 365 days.

With his 365 Ubuntu Climbs initiative, Andrew has pledged to hike up Table Mountain everyday in 2018 to raise R1 million on donations-based crowdfunding platform, BackaBuddy. The funds managed directly by BackaBuddy NPC, will be distributed to the following 3 non-profit organisations.

“I aim to empower 1 million South Africans that through no fault of their own started on the back foot in life.” – says Andrew

Habitat for Humanity, to build homes for the disadvantage and fulfill their basic right to safety against the elements. “Habitat for Humanity is an organization I got my previous company involved with after Nelson Mandela passed away, where we hoped to build two homes a month for the less fortunate.” – says Andrew

One Heart For Kids, to teach children the value and importance of reading and writing to positively impact South Africa’s literacy rate. “ I met, Lisa Thompson-Smeddle, the founder of One Heart For Kids, the day after I had my idea and she had so many ideas and was so supportive.” – Says Andrew.

The Sunflower Fund, to create awareness around Leukaemia in South Africa, in hopes to increase their donor base. “I’ve worked with the Sunflower Fund in the past, raising money during Argus season for the past 5 years.“

Enchanted by Cape Town’s remarkable beauty and taking into consideration the unfortunate circumstances some South Africans are born into, Andrew decided to dedicate his year to a cause bigger than himself.

“Eight days before my last day of work the idea came to me whilst driving past the mountain on my way to Stellenbosch. My retrenchment was effective July 1st and instead of returning to corporate life – I decided to focus on honouring my idea which I treated like a business training both my body and my mind simultaneously. ” – says Andrew.

Although Andrew had been involved in a number of adventure activities in aid of various charities, he had never attempted a project on this scale, that would require this level of commitment and strain on his body. Thus began a comprehensive training schedule, which involved at least 3 hikes up table mountain a week.

For his final training challenge, Andrew conquered 9 peaks in a row, completing a hike up Lions Head and Table Mountain on the same day.

Whilst the majority of South Africans were on the receiving end of New Year’s celebrations, Andrew’s year started bright and early.

With words of encouragement from his mom and aunt and a ‘high five’ from friend, David Thompson, Andrew made his way up Table Mountain, where he watched the first sunrise of 2018 on top of Cape Town’s most popular peak.

“The saying ‘the longest journey always begins with the first step’ has never been more appropriate for me than 4:33 am on January 1st when I began my year long journey” – says Andrew

Understanding the monumental task in front of him, Andrew shares the method to his madness, his mantra for 2018, “It’s one step at a time”

“Sometimes you might feel overwhelmed by an idea you have or a task you need to complete. These can all be broken down into bite size chunks. 365 sounds a lot; focusing on the one I need to do today sounds much more manageable doesn’t it? Focusing on just the very next step means before you know it – you’ve completed a quarter of the climb; half the climb; the whole climb. Whatever you tackle in life.” Says Andrew.

Although Andrew’s campaign was met with mixed reactions, he remained headstrong and has already completed a total of 15 climbs and has raised an impressive R60 991.04 through BackaBuddy. He’s also been joined by 3 international climbers so far and has secured donations from New Zealand, Iceland, USA, Belgium, Denmark and Germany. Local tour guides are also pledging their support to tell as many of their guests about it to join and contribute.

“Some people were very supportive and understood right away what the scope and potential of the BackaBuddy campaign was; others needed more time to get there. The reality is when I had this idea; it didn’t matter what anyone told me. I knew that it was a powerful idea it was and nothing would stop me from doing it.” – says Andrew

How to get involved:

Andrew would like to encourage all South Africans to donate to his project to create a positive impact on those less fortunate.

By making a donation via ’s BackaBuddy campaign, donors will be invited to join the experience on a day of their choosing. Weather permitting, Andrew suggests a 6am early start or a late afternoon hike starting around 3 pm.

Donate Directly to Andrew’s cause:
https://www.backabuddy.co.za/365-ubuntuclimbs

“Andrew’s project is a perfect fit for a successful crowdfunding campaign: the idea of reaching a sizeable target through many small contributions from a network of individuals who share your passion, illustrates our collective potential to bring about meaningful change” – Zane Groenewald – BackaBuddy Marketing/PR Officer

Previous: Learn How Bitcoin Works-What is Ethereum-Lesson 33
Next: Johanna McDowell appointed on advisory council of Women in Marketing

This flagship development aims to be a significant contributor to the economic development of both the West Coast region and the Western Cape province. With an investment of over R1-billion by Zenprop, Table Bay Mall has already created 5,000 jobs during construction and an estimated 8,000 additional jobs are to be created (including tenants and service providers).

Western Cape Premier Helen Zille said: “The Western Cape Government welcomes the significant investment by Zenprop. Table Bay Mall will contribute to job creation and driving economic growth in the West Coast and surrounding regions. The West Coast is fast becoming an important economic hub. Our government continues to work to create a conducive environment which enables businesses to operate freely, with as little red tape as possible. We encourage everyone to access goods and services from the Table Bay Mall. By working together we can continue to drive much needed economic growth.”

The important natural resource preservation measures include water-saving devices, which are essential for sustainable development in the Western Cape. These include two rainwater harvesting attenuation ponds where rainwater from the specially designed roof will be harvested and used for ablutions and irrigation. Any overflow from the ponds will be directed into the municipality’s storm water channels.

“I would like to commend the owners and management of the Table Bay Mall for putting various technologies in place from the outset to lighten its impact on the environment,” says Alan Winde, MEC of Economic Opportunities (responsible for agriculture, economic development and tourism). “These technologies, some of which are aimed at saving water, showcase their commitment to operating in a sustainable manner. Water conservation is all of our business, and private sector establishments like the Table Bay Mall are embracing innovation to drive us toward a new, more responsible, normal.”

Other sustainability measures include:
• power-saving mechanisms that range from LED lighting and daylight harvesting through to skylights, which are also glazed to ensure a comfortable internal ambience; and
• recycling initiatives that see wet waste sent to a bio plant instead of overloaded landfills, wet and dry compactors on site, onsite sorting of refuse from tenants and sorters for plastic, paper, cans and glass.

With 95% of the mall let, anchor tenants such as Pick n Pay, Checkers, H&M, Woolworths, Clicks and Dis-Chem will be showcasing their very latest store designs.

Adam Blow, Executive Director of Zenprop says: “The Table Bay Mall development meets international excellence standards and caters for a wide variety of shoppers and income brackets. We have considered both the current and projected residential growth in the area to offer the customers of the West Coast the very best and latest South African retailers have to offer in a leading edge design.”

Says Tim Harris, CEO of Wesgro: “Ventures like these are a critical catalyst for regional development and investment attraction. The Table Bay Mall is situated at the heart of a fast-growing economic hub, and we are confident will serve this community and visitors well for years to come.”

Some of the technological innovations for shoppers include:

Concludes Blow: “We intend to continue providing benchmark setting and award-winning developments to the Western Cape in an environmentally and economically sustainable way that contributes positively towards the economy.”

Previous: Texan flavours to add spice to Valley Market
Next: NEPIC continues to bite off chunks of ISP market share in partnership with Interface Digital.

Click here to submit an advertorial for your business.

Previous: ANC’s Zuma-shaped hole set to get deeper and darker
Next: KPMG resigns as auditors for Gupta companies